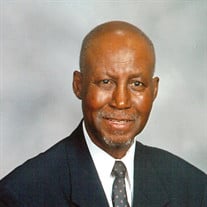 Mr. Marshall Goss passed away Wednesday, February 17, 2021 after a lengthy illness. He was born January 31, 1928 in Louisville, Mississippi the son of David Goss and Adele Hannah Goss. He married Mary Pearl Glenn on July 3, 1947, she passed away September 3, 2000 after 53 years of marriage. He moved to Saginaw, Michigan in 1953 to seek a better life for his family. Marshall was a faithful member of Mt. Olive Institutional Missionary Baptist Church since 1953. He served on the Trustee Board, past president of the Laymen League, a member of the Senior and Male Choirs. Marshall was very faithful in his service to the Lord and his church until his health started to decline. He retired from General Motors Chevrolet Grey Iron Plant after 38 years of service and was a member of UAW Local 668. Marshall also was a member of the Mason’s H. York Harrison Lodge, a lifetime member of the NAACP. His passion was growing vegetables and working in his garden. He would sell or give his vegetables to many friends and relatives. Marshall loved to visit the sick and shut-ins at the hospital, nursing homes and their home to uplift their spirits as needed. There were not too many things that he wouldn’t do to help people in need. He had a kind and sincere heart. Mr. Marshall Goss leave to cherishes his memory: three children, James and Alexander Goss of Saginaw, MI and Luevon Goss of Atlanta, GA; six grandchildren, Milton (Becki) Goss of Bonsall, CA, Adrienne (Lester) Bryant of Smithfield, RI, Chandra (Ben) Coupet of Porter Ranch, CA, Danitra Goss of Alpharetta, GA, Demetrice Goss of Saginaw, MI and Alexander Goss of Detroit, MI: eight great-grandchildren, Paige and Paris Goss, Blake and Chase Coupet, Gunnar, Gisele, Gavin Goss and Parker Satchell; two brothers, Lennon Goss and Terry Clifford, both of Louisville, MS; a host of nieces, nephews, cousins, other relatives and friends including special friends for many years, B.L. Little and Jessie Payton, both of Saginaw, MI. Mr. Goss was preceded in death his wife, Mary Pearl Goss; son, Marshall Goss, Jr.; parents, David and Adele Goss; sisters, Emma Jean Carter and Bertha Lee Triplett; daughter-in-law, Phyllis K. Poole-Goss. Due to Covid-19 restrictions, private funeral service will take place in Saginaw, MI and Louisville, MS, where he will be laid next to his wife and son. Visitation will take place from 2:00-6:00 p.m. Monday, March 1, 2021, at Evans & Browne's Funeral Home, 441 North Jefferson Avenue, Saginaw, Michigan 48607. A private funeral will be held. Dr. Marvin T. Smith will officiate with interment in Center Ridge Baptist Church Cemetery. Mr. Goss will be taken to: Beck Funeral Home, Inc, 226 North Street, Louisville, MS 39331.

Mr. Marshall Goss passed away Wednesday, February 17, 2021 after a lengthy illness. He was born January 31, 1928 in Louisville, Mississippi the son of David Goss and Adele Hannah Goss. He married Mary Pearl Glenn on July 3, 1947, she passed... View Obituary & Service Information

The family of Mr. Marshall Goss created this Life Tributes page to make it easy to share your memories.

Send flowers to the Goss family.