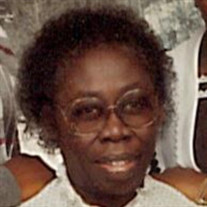 Martric Harris was born May 26, 1929 in Sandersville, GA. She was the fourth child born to Lewis and Mae Etta Madison. Martric married Early Bentley in 1948. One year later they had a child which they named Regina. In 1951 they moved to Saginaw,... View Obituary & Service Information

The family of Ms. Martric Harris created this Life Tributes page to make it easy to share your memories.