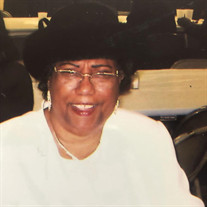 Our beloved mother, grandmother, sister and aunt passed away on January 5, 2022. Mary, also known as Bessie. She was born August 5, 1936 the 7th child of William “Bill” and Mary Bentley in Sandersville, Georgia. Upon coming to Saginaw, Michigan Bessie attended, and graduated from Saginaw High School. She accepted Christ early on in her life. For several years, Bessie worked as a phlebotomist at St. Mary’s Hospital. Later she was employed by General Motors Delphi and retired in 2000. She was a hard worker, very conscientious. Whenever she started a project Bessie was sure to see it through. She was a good cook and she enjoyed watching wrestling. Bessie was always very attentive to those whom she loved. If you had a problem and needed someone to talk to, you could count on Bessie to have a listening ear and she offered good sound advice. She is survived by her beloved son, Lester Peoples; daughter-in-law, June Brooks; three sisters, Helen Ashley, Macon, GA, Geneva (Julius) Jones, Chicago, IL and Bernice Walker, Saginaw, MI; grandchildren, Kijuan Ross, Maurice and Vernice Acoff; a special cousin, Lillie Mae Cooper and special friends, Ivy Menzie and Calvin White, a host of other relatives, friends and mainly her Soul Survivor friends. Bessie leaves a void in the life of those who knew her well. Bessie was preceded in death by her parents Bill and Mary Bentley; three brothers, Walter, Ephraim and Early Bentley; two sisters, Annie Mae Thomas and Juanita Finch. I would like to thank all my family for their support as well as Evans and Browne’s Funeral Home and St. Mary Ambulatory. The funeral service will take place at 11:00 a.m. Wednesday, January 19, 2022 at Evans & Browne's Funeral Home, 441 North Jefferson Avenue, Saginaw, Michigan 48607. Interment in Forest Lawn Cemetery, 3210 S. Washington Avenue, Saginaw, Michigan 48601. Visitation will take place from 9:00 a.m. until the time of service.

Our beloved mother, grandmother, sister and aunt passed away on January 5, 2022. Mary, also known as Bessie. She was born August 5, 1936 the 7th child of William &#8220;Bill&#8221; and Mary Bentley in Sandersville, Georgia. Upon coming to... View Obituary & Service Information

The family of Mrs. Mary Bessie Little created this Life Tributes page to make it easy to share your memories.

Our beloved mother, grandmother, sister and aunt passed away...

Send flowers to the Little family.