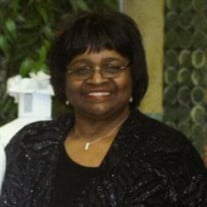 Mary Richardson, formerly of Saginaw, Michigan, age 82 years was born April 2, 1940 in Tuscaloosa, Alabama to the parents of John and Roberta Bell. After graduating high school in Tuscaloosa. May Bell met and married L.C. Richardson and moved thereafter to Saginaw, Michigan. Having the love, caring and concerns for others, Mary decided to further he education and received a Bachelor’s Degree from Saginaw Valley College and a Master’s Degree from Michigan State University. She became an elementary school teacher for the Saginaw Board of Education with over 32 years of service. After retirement, she relocated to Dallas, Texas to be closer to family. Mary was a devoted Jehovah’s Witnesses for over 40 years. She enjoyed sharing HIS Word while going door to door, doing phone ministry, conducting Bible studies, while attending weekly meetings and conventions to teach others about Jehovah. She spoke often about people she encountered in her lifetime that she built long-term connections with from children that she taught, sisters and brothers at the Michigan and Texas Kingdom Halls as well as childhood friends; Ms. Gladys Hearns-Jackson and Ms. Maryann Blackmon, college friend, Ms. Patricia Genwright-Brown. Many talks about Jehovah’s word with Ms. Gloria Hill and several other brothers and sisters at the Kingdom Hall. She will be remembered as a supportive and loving woman by her husband of 63 years and caretaker, L.C. Richardson; Mary’s four children, Gregory (Janice) Richarson of Saginaw, Donald (Andrea) Richardson, Garland, TX, Corey (Rochel) Richardson, McKinney, TX and Gwendolyn (Gregory) Jackson, Midlothian, TX; stepson, Anthony Sullivan, Los Angeles, CA; seventeen grandchildren and a grand-dog, Tito, along with great-grandchildren; great-great-grandchildren who knew her as one of the sweetest grandma/Nana’s there ever was. Her children knew their mother was a special woman who instilled in them education, love and prayer. She also leaves three sisters, Dorothy (William) Martin, Brenda (Samuel) Culberson, Saginaw and Lenda (Edward) McGowan, Durant, OK knew their sister as an intelligent woman who loved people. Mary leaves a host of nieces, nephews, cousins, in-laws and many other family and friends who reside in Michigan, Texas, Alabama, California, Ohio, Pennsylvania and Georgia. Mary was preceded in death by her parents, John and Roberta Bell; two brothers, Walter and Edward McVay and one sister, Lois Hopkins. Mary Richardson was a wife, mother, mother-in-law, grandmother, great-grandmother, great-great-grandmother, sister-in-law, aunt, cousin, friend and a sister at the Kingdom Hall. She was also a loving woman whose smile lit up a room. She had a caring heart, always spoke works of wisdom, her prayers and patience that she possessed will remain in our memories and hearts forever. Rest in PEACE beautiful lady, you will be missed, and we will always Love You!

The family of Mrs. Mary L. Richardson created this Life Tributes page to make it easy to share your memories.

Send flowers to the Richardson family.