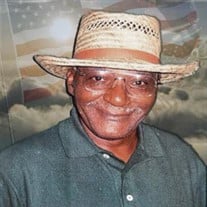 I have fought the good fight, I have finished the race, I have kept the faith… Our beloved father, grandfather, brother, and uncle, Melvin Lee Baldwin, Sr. fought many battles on and off the battlefield, but he fought his final battle on February 28, 2021. Melvin was born, the fourth of fourteen children,  to Ivra Baldwin, Sr. and Beatrice Ivory Baldwin on February 25, 1948, in the small farming community of Altheimer, Arkansas. Melvin confessed a hope in Jesus Christ and was baptized at an early age at the Mt. Zion Baptist Church in Altheimer. He also attended Altheimer Public Schools where he graduated in 1966. After graduation from high school, Melvin moved to Saginaw, MI. It was here that he met and married Gail Crittendon in 1970. To their union, one daughter, Melba Denise Baldwin, was born. Although he was employed by General Motors in 1966, shortly thereafter he was drafted to serve in the United States Army in the Vietnam War. After 18 months, he returned to Saginaw after receiving an honorable disability discharge due to excessive wartime trauma. Upon return, Melvin was being trained to work as a skills tradesman for General Motors, but the PTSD from the war forced an early retirement. Melvin moved back to Arkansas in 1972 and it was there that he met and married Brenda Laws in 1980. To this union one son was born, Melvin Lee Baldwin, Jr. After 27 years back in Arkansas and overcoming many physical and psychological battles from wartime injuries, Melvin moved back to Saginaw under the care of his sister, Etta and her husband Gary Hunt. He remained under their care for 15 years, with assistance from his “Irish Twin” Betty Mason and daughter Denise, until his failing health required him to move into Paradise Adult Foster Care (AFC) home. He leaves to mourn his passing his daughter, M. Denise Baldwin; son, Melvin Baldwin, Jr., two brothers Keith (Latanza) Baldwin, Sr., Atlanta, GA and Roy (Evelyn) Baldwin, Sr., Saginaw, MI; five sisters, Etta (Gary) Hunt, Betty Mason, both of Saginaw, MI, Levonne Ross of Las Vegas, NV, Pamela Baldwin of Little Rock, AR, Patricia (Clarence) Oates of Pine Bluff, AR and Cynthia Baldwin-Ashford of Largo, MD; two grandsons, Akia and Malik Baldwin; a granddaughter, Nia Baldwin; a great grandson, Braylon Baldwin; an aunt, Ardelia Thomas of Pine Bluff, AR; a step-daughter, Lakisha Culclager, AR;  two step-sons, Radhi Dulaney, NC and Tyrone Dulaney ,CA; a loving host of nephews, nieces, cousins and friends. Mr. Baldwin was preceded in death by his parents, Ivra and Beatrice Baldwin; four brothers, Albert, Ralph, Ivra Jr. and Bernard Baldwin; one sister, Linda Baldwin. Visitation will take place from 2:00-6:00 p.m. Friday, March 5, 2021, at Evans & Browne's Funeral Home, 441 North Jefferson Avenue, Saginaw, Michigan 48607. A private funeral will be held. Pastor Roy Baldwin will officiate with interment in Great Lakes National Cemetery, 4200 Belford Rd., Holly, Michigan 48442.

I have fought the good fight, I have finished the race, I have kept the faith&#8230; Our beloved father, grandfather, brother, and uncle, Melvin Lee Baldwin, Sr. fought many battles on and off the battlefield, but he fought his final... View Obituary & Service Information

The family of Mr. Melvin Lee Baldwin created this Life Tributes page to make it easy to share your memories.

I have fought the good fight, I have finished the race, I have...

Send flowers to the Baldwin family.