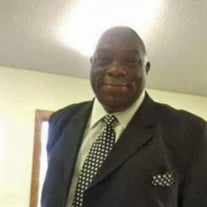 Our dad affectionately known as “Bubba” graduated from Saginaw High School Class of 1968. While attending Saginaw High he played Basketball, Football and Softball. After High School, he was drafted into the United States Army on June 14, 1969 on his Wedding Day. After serving for four years in the United States Army he returned home and continued working at the Nodular Plant and later he began working at the Grey Iron for over 49.5 years. He retired in 2008. Bubba enjoyed spending time with his family. He especially enjoyed his children, grandchildren and great grandchildren. "Bubba" enjoyed listening to Jazz, playing dominoes’ and eating his all-time favorite foods, tacos, banana pudding, banana now & laters, banana splits from Tony’s and to wash it all down with a nice cold Pepsi. Those who knew our dad knew that he was a very kind and loveable man with a very WARM SMILE. He will truly be missed. Milton leaves to cherish his memories are his, three sons and two daughters, Kevin (Gioia) Marshall of Saginaw, MI, Brian (Kypkenya) Marshall of Reynoldsburg, OH, Tristian (Opal) Marshall, Stacey Marshall and Kellee (Charles) Garrett II, all of Saginaw, MI; 23 Grandchildren and 13 Great grandchildren; six sisters and two brothers who will cherish his memories, Claudia Thompson, Judy Marshall, Phyllis Marshall, Martha Ann Weatherspoon, all of Saginaw, MI. Esther Baker and Marilyn (Billy Ray) Hines of Kalamazoo, MI, Robert (Anitra) Baker of Saginaw, MI and Anthony (Shirley) Baker of Kalamazoo, MI; one sister-in-law, Shirley Hudson of Kalamazoo, MI; Many nieces and nephews, cousins and friends, his special friends were Leonard Adams, Joyce Winters, Mark Blakely and Aaron Mitchell; thank you to each of you for being a good friend to our dad. We would like to say “THANK YOU” to our mom Freddie Mae Marshall for being there for us through this lengthy illness of our dad. We thank you for all that you have done and will continue to do for us. We love you with all that we have in us. We would like to give a “SPECIAL THANK YOU” to Tey’Ariana for taking care of our dad on a daily basis. We want you to know that you have done a wonderful job and we appreciate you for that. Karizma, or Momo as granddad called you, thank you for being available to clean up for him and doing his laundry when needed. Thank you to the Doctor’s that helped with his care during his transition Dr. Gifford, Dr. Malik, Dr. Bartnik and the VNA Hospice Team. Milton was preceded in death by parents, Mr. James and Mildred (Tilmon) Baker; sister, Annie Mae Smith; two brothers, Gregory Marshall and Willie Baker, Sr.; two nephews, Andre and Keyontae Marshall and one brother-in-law, Bobby Thompson and a very dear friend, Robert Veasley. The family hour will take place at 10:00 a.m. on Thursday, December 2, 2021, at Evans & Browne's Funeral Home, 441 North Jefferson Avenue, Saginaw, Michigan 48607, with the funereal service commencing at 11:00 a.m. Pastor Desmond Daniel will officiate with interment in Forest Lawn Cemetery, 3210 South Washington Avenue, Saginaw, Michigan 48601. Friends may call at the Evans & Browne's Funeral Home, 441 N. Jefferson Avenue, Saginaw, MI 48607 on Wednesday from 2:00 p.m. until 6:00 p.m.

Our dad affectionately known as &#8220;Bubba&#8221; graduated from Saginaw High School Class of 1968. While attending Saginaw High he played Basketball, Football and Softball. After High School, he was drafted into the United States Army on... View Obituary & Service Information

The family of Mr. Milton "Bubba" Marshall created this Life Tributes page to make it easy to share your memories.

Our dad affectionately known as “Bubba” graduated from Saginaw...

Send flowers to the Marshall family.