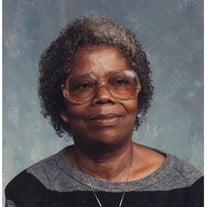 Minnie M. (Bostic) Clayton was born on July 8, 1927 in Panola, Alabama the daughter of the late Edgar and Sally (Stanton) Bostic. She passed away Tuesday, January 25, 2022 at the age of 94 years. Minnie Mae whom we called “Minnie Mama” was a homemaker and a very good one. She cared deeply for her family and her friends who were also considered family, and for her neighborhood where she lived for over 50 years. Minnie was a member of Bethel A.M.E. Church until her health failed. She enjoyed fishing, going to bingo and playing the lottery, but most of all she enjoyed being with her family. She not only raised her children but also played a major role in raising her grandchildren and great-grandchildren. She was a very loving and caring person who was always willing to help anyone who was in need and it was as if she never met a stranger. Anyone who knew her knows that she had a loving and sharing heart to the point that sometimes it meant going without for herself. She leaves to cherish her memory, her two daughter, Irma J. Turner (Marshall Ward) and Annette Turner both of Saginaw, MI; grandchildren, Lee Donald, Edgar Stevenson, DeSean Turner, Rebecca Turner, Igister Turner III, James Davis, Nehmann Turner all of Saginaw, MI, Sherie Turner, Willoughby Hills, OH, Reginald Turner, Cibolo, TX, Tangela Turner, Grand Prairie, TX, Montel Turner, Auburn Hills, MI; great-grandchildren; special daughter-in-law, Mrs. Laura Turner; nieces, nephews, cousins and friends. Mrs. Clayton was preceded in death by her husbands, Igister Turner and Galloway Clayton; sons, Edgar, Leroy, Bobbie, Igister and James Turner; granddaughter, Charlotte Turner; brothers, Mitchell, Morris and Percy Bostic; sister, Marjester Jones; step-mother, Susie Bostic and a step-sister, Sue Lee Davis. The family wishes to express thanks to her caregivers, Carla Hughes, Marion Donald and Michelle Ostash Donald, to Chesaning Nursing and Rehab Center and her Bethel A.M.E. Church family, and Evans & Browne’s Funeral Home. Funeral service will take place at 11:00 a.m. on Tuesday, February 8, 2022 at Evans & Browne's Funeral Home, 441 N. Jefferson Ave., Saginaw, MI 48607. Reverend Thelma Williams will officiate with interment in Forest Lawn Cemetery, 3210 S. Washington, Saginaw, MI 48601. Visitation will take place at the funeral home on Monday, from 2:00 until 6:00 p.m.

The family of Mrs. Minnie "Minnie Mama" Clayton created this Life Tributes page to make it easy to share your memories.

Send flowers to the Clayton family.