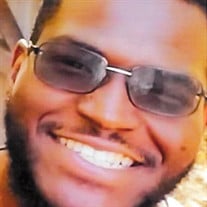 A wonderful brother, son and caring soul. He loved designing computer programs and video games. He was an avid reader. Even after achieving degrees in Computer Science, he continued his education. Mostly, he was a gentle loving soul. He leaves... View Obituary & Service Information

The family of Mr. Nkosi Olajawon Brown-Griffin created this Life Tributes page to make it easy to share your memories.

A wonderful brother, son and caring soul. He loved designing...

Send flowers to the Brown-Griffin family.