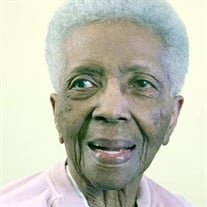 Ollie Mae Allen was born in Memphis TN on 10-29-1928 to Mary Rodgers and Booker T. Brooks. She found the Lord at a young age and remained steadfast and strong in her faith her entire life. Ollie received her primary and secondary education through the Shelby County School system, followed by her attendance at Tennessee State College where she received an Associates Degree in Business Administration. She met Ernest Allen Sr., and through him, his brother Jimmy and the rest is history. Jim and Ollie married in June 1949. In August 1950 they had their first child, Michael. Soon thereafter, they made the Northern Migration, along with other family, for better employment opportunities. They ended up in Detroit, MI. In 1955, their second child was born, and things really became interesting. Ollie started working at Northville State Hospital as a Psychiatric Nurse in the early to mid-50s. She stayed with Northville working her way up to Court Liaison until her retirement in 1990. She maintained a strong work ethic, with respect for others and dignity throughout her career, and her dedication was complimented by numerous awards and recognition in her State Service. Ollie enjoyed a variety of activities and had a strong independence and determination. She loved to read, a passion that she encouraged and passed on not only to her children and grandchildren, but to anyone she would meet. She was an excellent bowler and partnered not just with her husband, but her partners in love John and Thelma Hudgins. They remained active in several leagues until the point where health restricted their participation. She was a gardener, loving a conversation across the fence, while pulling weeds and listening to whatever problems you choose to discuss. She had a generous heart, vibrant personality, and a giving spirit. She opened her home up to numerous friends, who became family to this day. She was hopeful, encouraging and genuinely concerned about others. She was a “Mom” to a number of wonderful people and gave infinite love with no restrictions. Ollie was predeceased by her mother and father, a brother (Jordan Deener). She lost her son, Michael, and her husband, in laws and special friends who are all awaiting her arrival, along with other family members to numerous to mention. She leaves this life, along with a myriad of love, laughter and happy memories, with wishes to all to continue their walk in life with faith, courage and kindness. To carry on her legacy she leaves: Sheryl and Tyrone E. Harge, Grandchildren: Courtney (Serge), Tyrone C. Harge, and Benjamin Nelson, Jr. Special Son: Floyd Jamison (Lil J), Godchildren: Deborah (Benjamin Sr) Hudgins-Nelson, John (Alisa) Hudgins Jr., Nephews and Nieces: Ernest (Charlotte) Allen, Jr., Elaine Allen Henry, Jerome (Marie )Allen, The Rodgers of Memphis, TN, The Crenshaws of Toledo, The Harge/Gill Clan, The Gibsons, The Diggs, and other loved ones too numerous to name. Cremation has already taken place and additional arrangements will be decided upon at a later date.

Ollie Mae Allen was born in Memphis TN on 10-29-1928 to Mary Rodgers and Booker T. Brooks. She found the Lord at a young age and remained steadfast and strong in her faith her entire life. Ollie received her primary and secondary education... View Obituary & Service Information

The family of Mrs. Ollie Mae Allen created this Life Tributes page to make it easy to share your memories.

Send flowers to the Allen family.