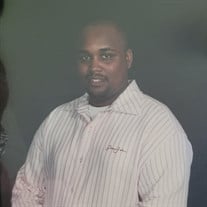 Our beloved son, brother, nephew, cousin and friend, Mr. Omar Karane Griffin returned home to be with his Heavenly Father on Saturday, December 25, 2021 at the age of 49 years. He was born August 6, 1972 in Saginaw, Michigan, the son of Sylvia... View Obituary & Service Information

The family of Mr. Omar Karane Griffin created this Life Tributes page to make it easy to share your memories.