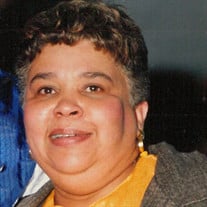 Mrs. Patricia Ann Scott, affectionately known as ‘Pat,’ passed away peacefully at home surrounded by her family. She received her angel wings as her soul ascended into Heaven on Thursday, February 4, 2021 at the age of 83 years. The eldest of five children born to Ann McKenzie Jones and Gilbert Jones, Patricia was born on July 20, 1937 in London, West Virginia. Pat was a resident of Saginaw, Michigan (Buena Vista Township). She was baptized as a Jehovah’s Witness at an early age. After becoming an adult and a studier of many faiths and religions with a sincere love for God, Mrs. Scott attended the Ninth Street Community Church under the leadership of her nephews, the late Pastor William L. Scott, Jr, and the late Pastor Rex A. Jones, Sr. After their passing she attended Bethel A.M.E. Church. A graduate of Washington High School in West Virginia, Pat graduated at the age of 15 having earned the honor of being named the class Valedictorian. After graduation, Pat received several scholarship offers from various universities from across the country. Due to her age, her parents wanted her to stay in state. So, she then chose one of the two colleges that accepted black students; West Virginia State College. While attending West Virginia State College she met her future husband, Robert Lee Scott and they were married on June 3, 1956. Following their marriage in 1956, they relocated to Saginaw, Michigan where she was offered a teaching position at Downes Elementary School in Buena Vista School District at the age of 19. As known by most who met her, Mrs. Scott had a no-nonsense personality. She was a “get to the point” type of person who did not believe in beating around the bush. She gave respect, and in return she expected to receive respect. Pat lived a life of excellence by striving to be always her best. Pat’s motto was, “Education and Teachers can make a difference.” She truly made a difference in the Buena Vista School District as a pioneer of year-round schools, her work with the Saginaw Growth, the Afrocentric Program (GAP), and the Reserve Officers Training (ROTC) program. Pat enjoyed nurturing young people and making learning worthwhile for all students. As she prepared students for obtaining higher education, she continued her own education receiving both her Bachelor’s and Master’s Degrees in Administration from Saginaw Valley State University. She was rightfully proud of her work experience as teacher, principal, Central Office Administrator, Consultant to Superintendents T.C. Wallace – Lansing Schools, Mildred Mason – Pontiac Schools, & James Smith – Buena Vista Public Schools, and Interim Superintendent of The Buena Vista School District. During her tenure, Patricia was employed at Downes, Henry Doerr, Archer A. Claytor, Ricker Jr. High, Buena Vista High School and as an Adjunct Professor at Saginaw Valley State University where she was instrumental in the development of the Black Studies Program. Mrs. Scott formerly served as Vice President of the Michigan Education Association and President of the Michigan Association of Superintendents & Administrators. Patricia had a case of wanderlust regarding international travel by flying to many different places including The Continent of Africa on numerous occasions. Patricia enjoyed memberships and affiliations with Sigma Gamma Rho Sorority, Incorporated, Gamma Psi Sigma Chapter, the Top Ladies of Distinction, Inc, the Michigan Education Association & National Association of Elementary Principals, the Buena Vista Education Association, the Buena Vista Administrators Association, and the National Association for the Advancement of Colored People (NAACP). Patricia was the recipient of many awards and accolades to include, The Sojourner Truth Award presented by the Negro Business and Professional Women; The Superintendent Leadership Award 1993-1994, The Meritorious Service Award 1983, The Equity Award, The Daring to Be Positive Award 1999, and the Special Retirement Award to name a few. Patricia leaves to cherish her legacy, her three sons, Ivan (Amy) Scott, N’Gai A. Scott, and David A. Scott; 8 grandchildren, Dominic and Doreen Scott, Lansing, MI; N’Gai Medel, San Antonio, TX; Megan (Dontaye) Harris, Saginaw, MI; Justice Byas, Nashville, TN; David Aaron, Atlanta, GA, MyAsia Parrish, MI; Tania, Atlanta, GA and Danielle, Saginaw, MI; four great-grandchildren, Taylor Marie, Dontaye Jr. and Ahmir; 2 Sisters, Mrs. Barbara (Freddie) Riley, Carmel, IN; Debra (Daniel) Parish, Bay Mills, MI. 4 Sisters in Law; Roberta Johnson & Pearl Heilig, Saginaw, MI, and Barbara Jones and Special niece, Ethelind Scott, Saginaw, MI. She leaves to cherish her memory many friends & colleagues including special friends, Mrs. Brenda (James) Harris, Mr. Roy Erndt, Mrs. Marva June Gordon, Connie Medel, Michelle Valentine, Ella McCoy, James Chaney and her incredibly special friend and caregiver, Thalia “Nette” Cooper and a host of nieces, nephews, and other relatives. Mrs. Scott and her husband Robert became a caretaker and unofficially adopted Archie Joel Tullos, Los Angeles, CA, into their family on December 25th, 1976. Mrs. Scott was preceded in death by her parents, husband, Mother & Father in-law Lewis & Zophery Scott; 2 brothers John Taylor Jones & Stanley Jones, 4 brothers in law, and 2 sisters in law. The family wishes to extend a special thank you to the staff at Covenant VNA Hospice, the Doctors and Staff of Covenant Medical Center, and to the friends, neighbors, and colleagues from whom they have received phone calls, cards, prayers and whatever was done to ease their burden during their time of bereavement. At the request of Mrs. Scott, Cremation has already taken place. Due to the Covid-19 Pandemic restrictions, a memorial service will be held on a later date.

Mrs. Patricia Ann Scott, affectionately known as &#8216;Pat,&#8217; passed away peacefully at home surrounded by her family. She received her angel wings as her soul ascended into Heaven on Thursday, February 4, 2021 at the age of 83 years.... View Obituary & Service Information

The family of Mrs. Patricia Ann Scott created this Life Tributes page to make it easy to share your memories.

Send flowers to the Scott family.