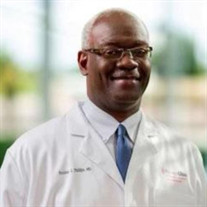 Dr. Preston John Phillips was born September 11, 1962, to Rev. Paul and Eloise Phillips in Saginaw, Michigan, the 6th of 9 children. Coming from humble beginnings, his work ethic kicked in early with his first job delivering newspapers at the age of 8. Throughout his adolescence, he found many ways to make an honest dollar, from shining shoes to gathering shopping carts at the local department store. He was caring and selfless even as a child. When the family dog was hit by a car, Preston used all his savings to pay veterinary fees to mend his dog’s leg. As a teenager, Preston moved to Atlanta, Georgia where he completed his secondary education at Fredrick Douglas High School. While in high school, his love for medicine was solidified with an invaluable summer internship shadowing Dr. Sam O. Atkins, a local urologist. Returning to finish up his senior year of high school, he quit the football team to focus on his studies in preparation for one day entering medical school. Preston began his post-secondary studies at Emory University in Atlanta, Georgia, where he earned 3 degrees in 4 years. Having been raised by a pastor, he had a love for scripture and enrolled in several religious studies courses. He also had a keen mind for math and science and decided to pursue a degree in chemistry. He excelled, of course, and was able to enter the organic chemistry master’s program while still in college. Four years later, he graduated with bachelor’s degrees in Religion and Chemistry and a master’s degree in Organic Chemistry. In 1990, he graduated cum laude from Harvard Medical School in Boston, Massachusetts. While there, he completed research and thesis work in the study of heart disease. After medical school, he began a General Surgery residency at Yale University School of Medicine, Yale New Haven Hospital in New Haven, Connecticut. After his rotation in Orthopedic Surgery, he was smitten. Fellow residents sold him on the idea that “orthopods” were the carpenters of medicine and got to use tools such as hammers, saws and nails to mend bones in the human body. He was indeed sold and was willing to extend his residency into an additional year after switching to Orthopedic surgery. With a heart for service, Preston founded the Yale Minority Medical Association during his residency. He was concerned about the status of minorities as patients and as clinicians. The organization focused on minority recruitment, mentorship and retention, hosted annual community health fairs, symposiums and a monthly lecture series for its members. After residency he was selected as the Daniel E. Hogan Spine Fellow at Beth Israel Deaconess Medical Center, Harvard Medical School specializing in spinal surgery under the leadership and guidance of Dr. Augustus White. With large hands and a determined spirit, he set out to learn the intricate skill of executing surgery on the human spine. He began his formal career in 1997 as an Associate at Seattle Orthopedic Fracture & Clinic/Swedish Medical Center in Seattle, WA. In 2005, Preston relocated his family and practice to Tulsa, Oklahoma, accepting a position with Warren Orthopedic Clinic/Saint Francis Health System. His relationship with his patients over many years and many miles remained consistent. A true servant of God, he did not take his role lightly. He was thoughtful, patient, caring and kind. He invested all his being into every single patient. Each were treated with dignity, respect and as everyone soon learned, appointments were seldom rushed. Near and dear to his heart was his 47’ Bayliner Motor yacht, Almost Perfect II, currently docked in Edmond, Washington. He enjoyed time spent on his boat with family and especially during his annual brothers’ trip where there was fishing, crabbing and cruising on the Seattle/Northwest Pacific waters. He was a jazz aficionado and even performed as saxophonist with adult bands as a teen (with his mom’s permission). He also founded a small jazz band during his early college years, before the load of earning 3 degrees kicked in. A fierce competitor, Preston enjoyed playing tennis and managed to win a few USTA area championships over time. During his rare downtime, he enjoyed playing games and engaging in friendly banter over games like Dominoes or Bid Whist. To know Preston was to love him. Everyone he encountered was met with open arms and a warm heart. He was indeed the true definition of a gentleman. To quote another, “He was kind, patient and very attentive. He was a mentor, an educator, a leader, a healer with a loving, compassionate and protective soul. Many would refer to him as a gentle giant with an infectious smile that would brighten anyone’s day.” Left to cherish his memory are his loving wife of 34 years Melody (Davenport), son Jarrett Thurman of Austin, Texas, two daughters, Erin Caimille of Tampa, Florida and Elise Victoria of Washington D.C., Siblings Parris (Sandra) Phillips of Conyers, Georgia, Patrick Phillips of Saginaw, Michigan, Pamela (William) Carey of Saginaw, Michigan, Paul Phillips of Kenosha, Wisconsin, Paula (Russell) Terrell of Saginaw, Michigan, Piper Phillips of Las Vegas, Nevada, Phyllis Phillips of Saginaw, Michigan and Philip (Mattie) Phillips of Clarkston, Michigan and a host of nieces, nephews and extended family members. Preston was predeceased in death by his parents, Rev. Paul and Eloise Phillips. The Family would like to send our heartfelt thanks to Sigma Pi Phi-Epsilon Iota Chapter, Saint Francis Health System/Warren Clinic, John Kelly Warren and Family, Matt Benjamin and the Doubletree by Hilton Warren Place staff, the Tulsa (OK) Chapter of the Links Incorporated, Jay Krottinger and Ryan Tanner, and all who extended fervent prayer throughout this journey. And to the Most High God, thank you for allowing Preston John Phillips to grace our lives for this short season. We are forever grateful, forever changed.

Dr. Preston John Phillips was born September 11, 1962, to Rev. Paul and Eloise Phillips in Saginaw, Michigan, the 6th of 9 children. Coming from humble beginnings, his work ethic kicked in early with his first job delivering newspapers at the... View Obituary & Service Information

The family of Dr. Preston John Phillips created this Life Tributes page to make it easy to share your memories.

Send flowers to the Phillips family.