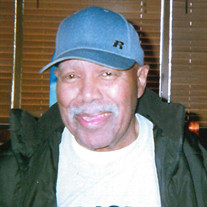 We are confident, I say, and willing rather to be absent from the body, and to be present with the Lord. II Corinthians 5:8 Robert &#8220;Bob&#8221; A. Lloyd our beloved father, brother, uncle, grandfather and friend passed away peacefully... View Obituary & Service Information

The family of Mr. Robert "Bob" Arnold Lloyd created this Life Tributes page to make it easy to share your memories.

We are confident, I say, and willing rather to be absent from...

Send flowers to the Lloyd family.