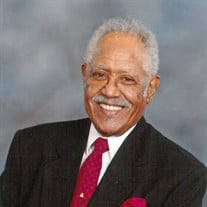 Our beloved husband and father passed away Tuesday, October 6, 2020 at the age of 92 years. He was born January 8, 1928 in Jackson, Mississippi the first son of the late Robert Lee McKandes, Sr. and Ethel Ross McKandes. Robert graduated from Campbell High School in Jackson, Mississippi. He attended Campbell Collage now known as Jackson State University for 2 years where he was involved in all types of sports. Mr. McKandes served in the United States Army during the Korean Conflict era (1951-53) with an Honorable Discharge after receiving two Bronze Service Stars and the National Defense Service Medal. Robert married Dorothy Clark in January of 1961. Besides his loving and devoted wife of 59 years they had two beloved sons, Robert Henry and Darnell Damon McKandes. Robert was employed for many years at the Honolulu International Airport. He was the Manager/Co-owner of a family owned Roller Skating Business, a member of the former Frontiers International Club where in 1982, he was honored as “Frontiers Man of the Year”. Robert directed the Junior Golf program, he was an avid golfer and a life member of “Saginaw County Sports Hall of Fame”. He was a member of Bethel A.M.E. Church and served faithfully on the Courtesy Committee until his health started to fail. Mr. Robert McKandes, Sr. leaves to cherish his memory; wife, Dorothy McKandes; two sons, Robert Henry and Darnell Damon McKandes; sister-in-law, Audrey McKandes; a host of nieces, nephews and cousins including Ann Jordan, other extended family and friends. A devoted husband, father who will be missed. Rest In Peace! Mr. McKandes was preceded in death by his parents, Robert, Sr. and Ethel McKandes; brothers, Melvin and John McKandes; cousin, Billy Jordan. Funeral service will take place at 11:00 a.m. on Friday, October 16, 2020 at Bethel A.M.E. Church, 535 Cathay Street, Saginaw, MI 48601. Pastor Dennis Laffoon will officiate. Friends may call at Evans & Browne's Funeral Home, 441 North Jefferson Avenue, Saginaw, MI 48607 on Thursday from 2:00 until 6:00 p.m.

Our beloved husband and father passed away Tuesday, October 6, 2020 at the age of 92 years. He was born January 8, 1928 in Jackson, Mississippi the first son of the late Robert Lee McKandes, Sr. and Ethel Ross McKandes. Robert graduated from... View Obituary & Service Information

The family of Mr. Robert Henry McKandes, Sr. created this Life Tributes page to make it easy to share your memories.

Our beloved husband and father passed away Tuesday, October 6,...