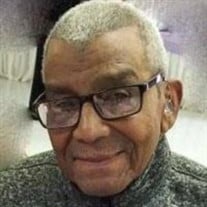 Our beloved father, grandfather and great-grandfather, Robert Tonylea Winters, Jr. went home to be with the Lord on December 11, 2021 at the age of 91 years. He was born December 6, 1930 in Yazoo, Mississippi the son of Robert Winters, Sr. and... View Obituary & Service Information

The family of Mr. Robert Winters, Jr. created this Life Tributes page to make it easy to share your memories.