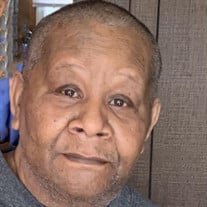 Ronald Otis (Big Jim) Ramsey, our brother, uncle and dear friend passed away on Thursday, February 19, 2021 after a lengthy illness and complications from Covid-19 at the age of 71 years. A lifelong Saginaw resident, Ronald was born April 1, 1949 to Charles Otis and Zannett (Clopton) Ramsey. He graduated, St. Joseph High School in 1967 and went on to work for Saginaw Public Schools. He was a custodian at both Saginaw High and North Middle Schools for 35 years until he retired. Known to his many friends as “Big Jim”, Ronald enjoyed watching sports, playing dominoes, and was an avid daily participant in the Michigan Lottery. Ronald was a man of honor; if he said it was so, it was so. His loyalty to his friends and family was a gift given with unconditional love. He leaves to cherish his memory a brother and sister, Lester (Lammert) Ramsey, Amsterdam; Michal Ann (Roscoe) Smith, Detroit; three nephews and one niece, Elton (Katie) Ramsey, Jason (Nikki) Coates and Michael Ramsey, both of Bridgeport, MI, and Ashleigh (Antoine) Spann, Hazel Park, MI; great-nieces and nephews, Jay’la, Janae, and Jayden Coates, Toledo, OH, Jason Coates, Saginaw, Samara, Kylie and Alana Tuzas, all of Saginaw; lifelong friend and brother, Odell Stanton; special friends, Donna Hughes and Lou Ann Fresorager who took such wonderful tender care of him. Ronald was preceded in death by his parents, Charles and Zannett Ramsey; brother, Douglas Wayne Ramsey; sister, Kim Zannett Ramsey Young and an uncle, Elton Clopton. Per Ronald’s wishes, cremation has taken place. There will be a memorial in his honor in the spring.

Ronald Otis (Big Jim) Ramsey, our brother, uncle and dear friend passed away on Thursday, February 19, 2021 after a lengthy illness and complications from Covid-19 at the age of 71 years. A lifelong Saginaw resident, Ronald was born April 1,... View Obituary & Service Information

The family of Mr. Ronald "Big Jim" Ramsey created this Life Tributes page to make it easy to share your memories.

Send flowers to the Ramsey family.