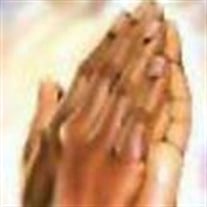 Roy A. Davis was born to Roy C. and Mae Jessie Davis on November 13, 1948 in Saginaw, Michigan where he lived all of his life. Mr. Roy Davis left us all on December 13, 2021 at 2:05 a.m. He has gone home to be with the Lord. He is and will be missed. He graduated from Saginaw High School in 1966. Roy and Ms. Rose Marie Bowman were schoolmates and best friends even up to his death. He served his country in Vietnam and he told of a battle he was engaged in while in a foxhole. Severe fighting was taking place between the Americans and the enemy. All Roy’s fellow soldiers died in that fox hole except him. He came home after serving his time in Vietnam sound minded and physically strong. He worked at St. Mary’s Hospital with more than 33 years of dedicated service before retiring in 2005. Roy was a very kind man. He was very close to his mother. Roy was into listening to music and had a great collection of vinyl records, 45’s, tapes and CD’s going back to the early 60’s. He enjoyed watching sports especially college football. He liked watching (western) cowboy movies. He enjoyed watching Joyce Meyer’s and a couple of other Christian speakers. He would talk about the Lord with Angela’s husband, Elder Larry Wanzo. Some of the last words that Roy spoke and heard came through Elder Wanzo. Roy leaves behind his father, Roy C. Davis; a brother, Tony C. Davis; a special niece, Angela (Elder Larry) Wanzo; great-uncle, Veron Davis; special cousin, Rick (Cheryl) Nash; nephews, Tony Gary and Tony Davis, Jr.; special friends, Rose Marie Bowman and Brickie R. Bowman a host of other family members whom we cannot name all of them and friends. Having succeeded him in death by his mother, Mae Jessie Davis in 2021; a sister, Renney M. Laddish in 1997; grandparents, Chester and Applelone Davis in 1993 and L.T. Sims in 1994 and Will Sims in 1986. Visitation will take place from 12:00-2:00 PM, Sunday, February 20, 2022 at Evans & Browne's Funeral Home, 441North Jefferson Avenue, Saginaw, Michigan 48607. Interment in Great Lakes National Cemetery, G-4200 Belford Road, Holly, Michigan 48442.

The family of Mr. Roy A. Davis created this Life Tributes page to make it easy to share your memories.

Roy A. Davis was born to Roy C. and Mae Jessie Davis on November...

Send flowers to the Davis family.