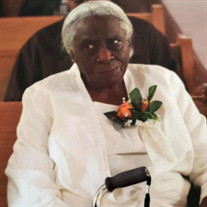 Ruth &#8220;Cotton&#8221; Jackson was born on March 9, 1929 in Waco, Texas to Erma Cotton. She passed away at the age of 92 years. Mrs. Jackson was a member of Freedom Full Gospel Church. She and her late husband, KB were the proud owners... View Obituary & Service Information

The family of Mrs. Ruth Elizabeth Jackson created this Life Tributes page to make it easy to share your memories.