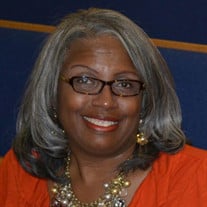 How do you sum up a life so well and so fully lived? How do you boil down the ups and downs, the relationships built and fostered, the wedding, the family, the disappointments, the delights, the faith and the favor? What is the hallmark of such a life? The life of Ruth Noreen Jones Smith. Her story began on February 12, 1947 in Grand Rapids, Michigan, the first-born daughter of Alvin and Nellie Jones, who both preceded her in death when Ruth was a child. Despite this early tragedy, she graduated from Grand Rapids Central High school in 1965 and began her collegiate education at Western Michigan University…but life would call. As it turned out, life as a college student would yield a different lesson…one that would lead her away from Western and to the state of Texas where she worked for Mountain Bell Telephone Company. After a year in El Paso, she transferred to Pacific Bell in San Jose, California. It was during this time that she crossed paths with a young man named Johnie D. Smith. She moved to Saginaw, Michigan, married Johnie and began their family. After the arrival of their three children - Ares, Arik and Athena – Ruth continued the lesson she had started in 1965 and went back to college at Saginaw Valley State University in 1979, eventually earning her Bachelor’s degree in Political Science as a mother of three. By obtaining her degree, she set an example that would inspire her husband as well as her children, who would all attend college. She was hired by the State of Michigan Department of Corrections, where she would advance to the position of Assistant Deputy Warden over a 25 year span. Despite the success Ruth and her family would enjoy, life was not without tragedies as she was preceded in death by her sister, Wanda Jones (1993), and her husband, Johnie D. Smith (1997). True to the faith and strength that defined her life, Ruth pulled the family together and soldiered on. Evidence of her aforementioned faith and strength can be found by simply looking at the impact she has had on those who have survived her: children, Ares Smith of Orlando, Florida, Arik Smith (Jeanelle) of Saginaw, Michigan, and Athena Thomas (Kerry) of McKinney, Texas who carry on her legacy; her grandchildren, Tyrese Smith, Kyrese Smith, Caleb Smith, Cole Smith and Kason Thomas; her sister in spirit, cousin in flesh, Joyce Hudson (Orange). An active member at Bethel A.M.E. Church for over 20 years, Ruth served as a Trustee and official photographer of the church and volunteered with numerous other auxiliaries. To further spread the gospel in the Saginaw area, Ruth was a founding member of United Sisters In Christ. She was a dedicated member of Alpha Kappa Alpha Sorority, Incorporated, initiated into Eta Upsilon Omega Chapter in 1983. Ruth was a Silver Star as well as a Life Member and displayed exemplary service to the sorority and community by engaging in various committees and programs. Over her 73 years, Ruth has meant many things to many different people. She was a daughter, a sister, a mother, an aunt, a grandmother, a teacher, a pupil, a mentor and a friend…often filling multiple roles for those touched by the wide reach of her love. She was a force of nature, and like forces of nature, she did not follow man’s path, she followed God’s path. She has touched countless lives and the reach of her sphere of influence is wide. Make no mistake, the world has lost an angel. Rest in peace, rest in power, rest in glory, Mama. A small, private memorial service will be held on Saturday, January 16, 2021. Everyone is welcome to watch the service online; the link will be shared on the Evans Browne’s Funeral Home Website. In lieu of flowers, the family kindly asks for donations to the general scholarship fund of Eta Upsilon Omega Chapter, Alpha Kappa Alpha Sorority, Inc. Donations can be sent via check (please put “Ruth Scholarship donation” in the memo line) made out to Alpha Kappa Alpha, P.O. Box 6853, Saginaw, MI 48608.

How do you sum up a life so well and so fully lived? How do you boil down the ups and downs, the relationships built and fostered, the wedding, the family, the disappointments, the delights, the faith and the favor? What is the hallmark of... View Obituary & Service Information

The family of Ms. Ruth Jones Smith created this Life Tributes page to make it easy to share your memories.

How do you sum up a life so well and so fully lived? How do you...

Send flowers to the Smith family.