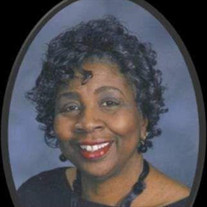 Sharon Michele (Wilson) Floyd was called from labor here on earth, to her heavenly home, on Thursday, October 28, 2021, at the age of 74 years. Sharon was born May 3, 1947, in Columbus, OH, the youngest of two daughters born to the late Rev. Dr. James Paris Wilson and C. Roberta (Johnson) Wilson Payne. The Wilson family relocated to Saginaw, Michigan in October 1958, when Dr. Wilson became the Pastor of Mt. Olive Institutional Missionary Baptist Church. Sharon has remained a member since October 30, 1958. Ms. Floyd is a proud graduate of the 1965 graduating class of Saginaw High School and still supported her alma mater by serving on the Class of 1965 Scholarship Committee. In 1970, she graduated from Wilberforce University with a Bachelor of Science Degree in Secondary Education, and continued her formal education at Michigan State University earning a Masters Degree in Curriculum and Instruction in 1974. Retiring from the Saginaw Public School District (SPSD) in June 2007, Ms. Floyd taught English for 30 years, and served as the English Department chairperson for 10 years. She was English Language Arts Coordinator for SPSD and was an adjunct professor at Delta College. Ms. Floyd most recently served on the staff of Commonwealth Community Development Academy in Detroit, where she continued to share her love for teaching, and mentoring others. She was a member of the National Council of Teachers of English and previously, a member of the National Writing Commission. Ms. Floyd was a proud and dedicated member of the Mt. Olive Institutional Missionary Baptist Church, where she served as Christian Education Chairperson, Sunday School Teacher, a teacher of the Christian Women, and a member of the Pastoral Advisory Council. Wherever needed, Ms. Floyd was eager and willing to serve. She is Past President of the Saginaw Valley Baptist District Woman’s auxiliary, Past President of the Wolverine State Baptist Woman’s Auxiliary, and was currently Treasurer of the National Baptist Convention Woman’s Auxiliary. She was actively involved in her community, serving as a mentor for students in the Saginaw Public School District, and she has also served as a Court Appointed Special Advocate (CASA) for Children. She most enjoyed volunteering at the Eastside Soup Kitchen with other members of Mt. Olive and she was a Life Member of the Saginaw Branch NAACP. Previously, she worked as a community liaison for former 95th District State Representative Stacy Erwin Oakes. Ms. Floyd was initiated into the sisterhood of Delta Sigma Theta Sorority, Inc., Beta Chapter (Wilberforce University), in 1969, and received her 50-year recognition in 2019. As a member of Saginaw Alumnae Chapter, she has served in various leadership roles, including Chapter President, Chair of the 50th Chapter Chartering celebration, and currently as Chaplain, and member of the Michigan Delta Dear Committee. She was a true example of sisterhood, friendship, and mentorship, she always found a way to encourage and uplift others, no matter their circumstance. Sharon was a great cook, and enjoyed preparing delicious meals for family and friends, especially during the holidays. She looked forward to laughter and fun with the Baptist Birthday Celebrants, traveling, and fellowshipping at the Baptist Conventions. She was an avid shopper, legendary educator, a lover of people, and the epitome of a Titus 2 woman. She was a loving mother, to Melvin P. Barkley and daughter-in-love, Juanae Barkley; two-step-daughters, Shirley Ann Floyd and Tenisha Dillard; an amazing grandmother to Christian Barkley and De’Ara Jackson; and an endearing godmother to Shaneditha (Sha’) and Alliecia (Allie) Butler; two devoted sisters-in-law, Georgia Barkley and Marcia (Ben) Williams. Her legacy of love will remain in their hearts forever. She also leaves a host of cousins and many dear and devoted friends which include, Janet Pruitt, Rhonda Farrell-Butler, Brenda Martin, Shirley Cooper, Odessa Caver, members of the Baptist Birthday Celebrants, Betsy Little and Maria Tarrent; two adopted daughters, Joy Creel and Cristi Cooper Ray. Precious memories will remain with her Sorors of Delta Sigma Theta Sorority, Inc., Saginaw Alumnae Chapter, former students, Pastor Marvin T. & Omie Smith Family and the entire Mt. Olive Institutional Missionary Baptist Church family; Memories will also be cherished by the officers and members of the Saginaw Valley Baptist District Association, Wolverine State Baptist Convention, the National Baptist Convention, U.S.A. Incorporated, and the many lives she touched in the Saginaw Community. Sharon was a devoted wife to Lucius Floyd for 37 years, he predeceased January 26, 2020; parents, including Marthel Wilson and Leeanna Wilson; her only sibling, Gwendolyn Patricia Wilson, July 14, 2021. The family would like to express appreciation to Sharon’s caring and attentive neighbor, Philip Drake, and the wonderful health care workers from Ascension at Home: Decolia, Jessica, Sandra, Erin and George. The funeral service will take place at 11:00 a.m. on Monday, November 8, 2021, at Wolverine State Baptist Headquarters, 615 South Jefferson Avenue, Saginaw, MI 48601. Dr. Marvin T. Smith will officiate with interment in Forest Lawn Cemetery, 3210 South Washington. Saginaw, Michigan 48601. Friends may call at the Evans & Browne's Funeral Home, 441 N. Jefferson Avenue, Saginaw, MI 48607 on Sunday from 2:00 p.m. until 7:00 p.m. The Saginaw Alumae Chapter of Delta Sigma Theta Sorority, Incorporated will conduct an Omega Omega Service at 6:00 p.m. In lieu of flowers, those wishing to make memorial contributions in Sharon’s Floyd’s name, are asked to consider: Mt, Olive Baptist Church Scholarship Fund (1114 N. 6th Street), Saginaw, MI 48601 - Wilberforce University Scholarship Fund (P.O. Box 1001), Wilberforce, OH 45384, or Delta Sigma Theta Sorority, Inc., Saginaw Alumnae Chapter (P.O. Box 2062}, Saginaw, MI 48605

Sharon Michele (Wilson) Floyd was called from labor here on earth, to her heavenly home, on Thursday, October 28, 2021, at the age of 74 years. Sharon was born May 3, 1947, in Columbus, OH, the youngest of two daughters born to the late Rev.... View Obituary & Service Information

The family of Mrs. Sharon Michele Floyd created this Life Tributes page to make it easy to share your memories.

Send flowers to the Floyd family.