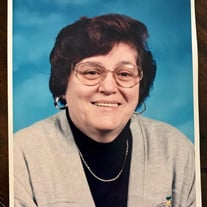 Mrs. Shirley Ann Layfield was born November 4, 1943 in Owosso, Michigan to Frank and Virginia Kirk. She departed this life on Monday, April 4, 2022 at the age of 78 years. She married Dudley Layfield, Jr., he preceded her in death. Mrs.... View Obituary & Service Information

The family of Mrs. Shirley Layfield created this Life Tributes page to make it easy to share your memories.

Send flowers to the Layfield family.