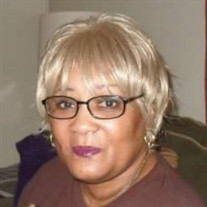 On Tuesday, October 13, 2020, after a lengthy illness, our dearly beloved Stephanie Elaine Smith heard the trumpets sound and took her eternal rest. She was born in Saginaw, Michigan, the daughter of the late Herbert and Leatha Theresa French-Herd... View Obituary & Service Information

The family of Ms. Stephanie Smith created this Life Tributes page to make it easy to share your memories.

Send flowers to the Smith family.