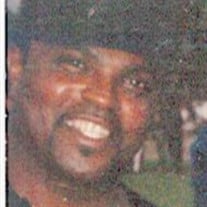 Terrell E. Sanders passed away on Wednesday, March 16, 2022 at the age of 73 years. Terrell was born January 27, 1949 in Saginaw, Michigan to Rogers and Jessie Sanders. He was a proud graduate of Saginaw High School. Terrell served a tour of duty in the United States Air Force during the Vietnam Conflict. He married Sydney Wyatt in 1971 and from this union three children were born. They later divorced in 1992. Terrell was an employee at General Motors Corp., a member of UAW and retired after many years of service. He had a great love for music and an amazing voice. As a member of several singing groups such as The Dynamics and The Eppics; his voice accompanied many greats of all time. Terrell had a very positive attitude and a sense of humor that will never be forgotten. He had a way of making jokes on real life and family that would bring those around to tears in laughter, including himself. Terrell is the father of four children, Felicia Sanders-Williams, Rhonda Sanders, both of California, Terrell Sanders II of Las Vegas, NV and Jamal Sanders of Saginaw, MI; nine grandchildren, Cory, Kaila, Amarri (Adrian), Anijah, Justin (Sabrina), Serrina, Kailani, Taraji and Tionne; four great-grandkids, Nairi, Roman, Izaiah and Kaine. Terrell has one living brother, Ronnie Sanders of Denver, CO; special niece, Kim Lockhart of Saginaw; aunts; uncles; many other nieces, nephews, cousins and friends. Terrell was preceded in death by his parents, Rogers and Jessie Sanders; sister, Brenda Prescott and brother, Glenn Sanders. The family expresses special thanks to My Angel Adult Foster Care, his girls, Kay and Mrs. Dee, his buddy, Darryl Griffin, VA, Purple Team, Dr. GEE GEE. Visitation will take place from 2:00-5:00 PM on Friday, April 8, 2022 at Evans & Browne's Funeral Home, 441 North Jefferson Avenue, Saginaw, Michigan 48607, with funeral service commencing at 5:00 PM. Bishop Demspey Allen will officiate.

Terrell E. Sanders passed away on Wednesday, March 16, 2022 at the age of 73 years. Terrell was born January 27, 1949 in Saginaw, Michigan to Rogers and Jessie Sanders. He was a proud graduate of Saginaw High School. Terrell served a tour... View Obituary & Service Information

The family of Mr. Terrell Sanders created this Life Tributes page to make it easy to share your memories.

Send flowers to the Sanders family.