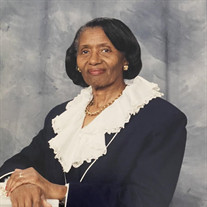 On Monday, March 7, 2022, Thelma Jane (Smith) Nichols, our dearly beloved mother, sister, grandmother, great-grandmother, aunt, cousin, and friend, transitioned peacefully from this life, with her family by her side at Hoyt Nursing and Rehab... View Obituary & Service Information

The family of Mrs. Thelma Nichols created this Life Tributes page to make it easy to share your memories.

Send flowers to the Nichols family.