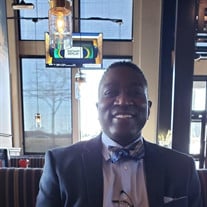 Timothy Darnell Robinson Sr. was born on May 3, 1967 in Saginaw, Michigan, the son of Annie Strother, Clifton (Buddy) Strother and Curtis (Maria) James Robinson. He passed away on October 24, 2021 at the age of 54 years old. Timothy was a proud... View Obituary & Service Information

The family of Mr. Timothy Darnell Robinson, Sr. created this Life Tributes page to make it easy to share your memories.

Send flowers to the Robinson, family.