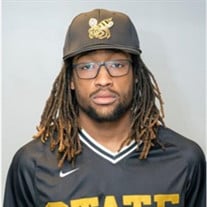 Master Trayvis Marcell Patterson journeyed on to his next life Sunday, September 6, 2020 at 24 years of age in Charleston, WV. The son of Dia SiMone Patterson and Alton Sanders was born on Sunday, September 17, 1995 in Saginaw, MI. Trayvis was given his first bat when he was just one-year old and his love for baseball began shortly after. At 22 months, he was the batboy for three youth baseball teams and was featured in the Saginaw News. As a child he played floor hockey, soccer, baseball, basketball, and football. When he was not playing sports, Trayvis loved to draw, dance, skate, listen to music, laugh with his friends, eat macaroni and cheese, and most took pride in being a father. Trayvis attended Saginaw Public Schools and graduated in 2013. He was a three-sport athlete and a 2012-2013 Homecoming Court attendant. Trayvis spent his summer vacations playing with the Saginaw Township South Little League where he later worked as an umpire and with the Saginaw Bay Riverdawgs Travel Team where he showcased his God given talents across Michigan, New York, Wisconsin, and Kentucky. Trayvis solidified his love for the game and continued his baseball career at West Virginia State University. "Patty" as he was known to his teammates- played all sides of the field as a pitcher, 2nd baseman, left and right fielder, and his favorites 3rd base and shortstop. Trayvis was an Art major and was just one class away from earning his Bachelor’s degree. Trayvis was loved everywhere he went. He was giving and unselfishly put others before himself. He worked as a caregiver with Rescare Residential and as a tattoo artist. With his creativity and passion for sketching, Trayvis envisioned his future as an arts teacher and entrepreneur. His dreams included using art to empower athletes living with depression and jumpstarting his clothing line. Trayvis leaves to treasure his memories and preserve his legacy; two daughters, Makennah SiMone Love Patterson and Avaeyah Rose Patterson; his mother, Dia Patterson-Harris; his father, Alton Sanders; three siblings that he was raised with, Deaira Sabré, Deborah Shyann and Dylan Miles; other siblings, Demascus, Shaquille, Diamond, Paige, Jaylen, Peyton and Donni; his grandfather that helped raise him, Rudolph Jr. (Shontell) Patterson; his grandparents, Yvonne Sanders and Lavalle (Deloris) Williams; great-grandmother, Lillie (Lewis) Fenderson; aunts, Savana (Byron) Brewer, Taylour Patterson and Sydnie Medina; uncles, Bryce and Ashtyn Patterson; his love and fiancée, Alexandra Nelson; his brothers from other mothers, Devario Allen, Andreas Parsley, Jerome Reeves, Reginald Peoples, Brandon Landin, Mateo Surles-Ramirez, Jerry Miles, and Quillan Reed; his special friends Angela Parker and Tyeisha Sherman (Makennah's godmother); and a host of aunts, uncles, cousins, friends and teammates. He was preceded in death by one brother, Quintravius Galvin; one uncle, Kenya Sanders; his grandmother, Deborah (Lawrence) Patterson; great-grandparents, Robert and Rosa Lawrence, Rudolphus Patterson Sr.and Maggie Williams. A special thank you to the Charleston Area Medical Center General Staff and Surgical Trauma Intensive Care Unit (STICU) team, Tabitha and Kenny; and the CORE representatives, Mike and Ryan. Funeral service will take place at 12:00 p.m. on Thursday, September 17, 2020 at Hoyt Park, South Washington Avenue, Saginaw, MI 48601. Pastor Vincent McMillon will officiate with interment in Forest Lawn Cemetery, 3210 South Washington Avenue, Saginaw, MI 48601. Friends may call at Evans & Browne's, 441 North Jefferson Avenue, Saginaw, MI 48607 on Wednesday from 2:00 until 6:00 p.m.

Master Trayvis Marcell Patterson journeyed on to his next life Sunday, September 6, 2020 at 24 years of age in Charleston, WV. The son of Dia SiMone Patterson and Alton Sanders was born on Sunday, September 17, 1995 in Saginaw, MI. Trayvis... View Obituary & Service Information

The family of Mr. Trayvis Marcell Patterson created this Life Tributes page to make it easy to share your memories.

Master Trayvis Marcell Patterson journeyed on to his next life...

Send flowers to the Patterson family.