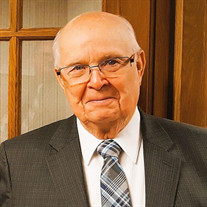 Mr. Vernon Lee Harmon was born on October 15, 1928 in Burnside, Michigan to Burley and Emma Mae (North) Harmon. He was one of nine children. He passed away Thursday, February 24, 2022. Vernon married Evelyn Mae Hurd on May 20, 1950 and they raised two sons, Vernon, Jr. and Michael and one daughter, Marion. Vernon was baptized as one of Jehovah’s Witnesses 61 years ago. He served as a zealous minister of the good news of God’s Kingdom and as a congregation elder until he passed away at 93 years of age. Vernon married Dorothy May Ownes on October 23, 1999. They were happily married for 22 years. He quickly became beloved by Dorothy’s children as well. Besides his love of the ministry, he was also known for being a great fisherman and for his love of gardening. He was hospitable, interested in people, and a good listener; because of these qualities, he was loved and respected by all. He leaves to cherish his memory his spouse, Dorothy May Harmon; one daughter and two sons, Vernon Harmon, Jr. (Pam), Michael Harmon and Marion Aldridge (Rick); stepchildren, Lori Leslie, Scott Owens, Joseph J. Owens and Erick Owens; five grandchildren, Blake Harmon, Jared (Amie) Harmon, Rebekah (Kevin) Hoyer, Erica (Dan) Leach and Renee (Casey) Olson; eight great-grandchildren; Emma and Ella Hoyer, Lily and Luke Olson, Caden, Colton and Chloee Harmon, and Conner Lee; many nieces, nephews and so many dear friends that it is not possible to list them all. Mr. Harmon was preceded in death by his parents, Burley and Erman Harmon; first wife, Evelyn (Hurd) Harmon; four brothers, Bernard, Kenneth, Earl and Melvin Harmon; five sisters, Ivaline Lamphier, Wilma Batoha, Betty Noland and Beverly Harmon and a beloved daughter-in-law, Diane Harmon. The family would like to express special thanks to the entire Bridgeport Congregation of Jehovah’s Witnesses, and the support of many other dear friends, and Michael from Covenant Hospice Care. A memorial service will be held on Saturday, March 26, 2022 at 2:00 p.m.

Mr. Vernon Lee Harmon was born on October 15, 1928 in Burnside, Michigan to Burley and Emma Mae (North) Harmon. He was one of nine children. He passed away Thursday, February 24, 2022. Vernon married Evelyn Mae Hurd on May 20, 1950 and they... View Obituary & Service Information

The family of Mr. Vernon Lee Harmon created this Life Tributes page to make it easy to share your memories.

Send flowers to the Harmon family.