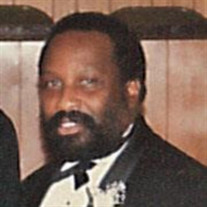 Mr. William Dix was born on July 12, 1944 in Bishopville, South Carolina to Willene Prescott and Richard Dix. He passed away at Mission Point Adult Care in Big Rapids, MI on Tuesday, May 17, 2022 at the age of 77 years. William grew up in Bishopville, S.C. and received his education through the Public School System. In the early 60’s, he moved to Saginaw, Michigan where he later met and married his wife Bernice Mason on November 18, 1977. He became a member of Zion Missionary Baptist Church. William was employed at Saginaw Steering Gear Div., General Motors Corp. and a member of UAW Local 699. He retired in 1997. He was a caring person who loved to fish and spend time with his family. In his spare time, he enjoyed going on long car rides, working on cars and reading car books. Mr. Dix also enjoyed watching TV, especially the National Geographic and the Animal Channels. William leaves to cherish his memory, his loving wife of 44 years, Bernice Dix; four children, Brent (Jacqueline) Collins, Antoine Collins, Tracy R. (David) Williams, all of Saginaw and Sherry E. (Goliday) Liddell of Lawrenceville, GA; cousin, Maurice (Marie) Washington, Saginaw, MI; 12 grandchildren, including special grandson, Will Collins; 13 great-grandchildren; close friends, John Lee, Jr., Vassar, MI, Matthew Hills and Michael Johnson, both of Saginaw and a host of other family members and friends. William was preceded in death by his parents, Willene and Richard Dix; a grandson, Thaao Abraham; two brothers, McKinly Dix and Richard Lee Dix; a sister, Ann Rembert; uncles Willie Prescott, Sr. and Willie Prescott, Jr.; and his favorite pet, “Chico”. The family would like to express special thanks to the nurses, doctors and staff at Covenant Medical Center Harrison and the Circle of Life Service in Saginaw and the Mission Point Adult Care in Big Rapids, MI. John 11:25-26 “Jesus said, I am the resurrection, and the life: he that believeth in me, though he were dead, yet shall he live: and whoever lived and believeth in me shall never die”. Family Hour 10:00 AM Friday, June 3, 2022 from the Chapel of Evans & Browne's Funeral Home, 441 North Jefferson Avenue with funeral service commencing at 11:00 AM. Pastor Roy Manning will officiate. Interment will take place in Forest Lawn Cemetery, 3210 South Washington Avenue. Visitation will begin at 9:00 AM until the time of service.

Mr. William Dix was born on July 12, 1944 in Bishopville, South Carolina to Willene Prescott and Richard Dix. He passed away at Mission Point Adult Care in Big Rapids, MI on Tuesday, May 17, 2022 at the age of 77 years. William grew up in... View Obituary & Service Information

The family of Mr. William Dix created this Life Tributes page to make it easy to share your memories.

Send flowers to the Dix family.