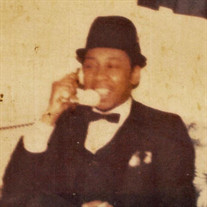 William Garth, Jr., lovingly known as Mickey, was born on May 25, 1957 in Saginaw, Michigan to William and Bertha (Larry) Garth. He was the second oldest of four children and the only boy. He passed away on Saturday, February 12, 2022 at the age of 64 years. William graduated from Saginaw High School “Class of 1975”. He received his Associates Degree in African American Services from Delta College. William was a Coast Guard from 1975–1982 and a reserve officer from 1980–1982 in Detroit, MI. It is there that he met his beautiful wife, the mother of his children, Regina Reed. They wed in October 1982, three children were born to this union, William Darnell, Aliscia and Charlemagne Garth. William was a dedicated husband, father and grandad who loved to play tennis, go bike riding, playing basketball and swimming. He was a sharp dresser and loved listening to music. Mickey was loved by everyone and had a personality out of this world. He kept a smile on his face and made sure everyone in his presence had a great time. William leaves to cherish is memory his loving wife, Regina; three children, William, Aliscia and Charlemagne Garth; grandchildren, Devon Wellesley, Daruis Wellesley, Alaya Thurmond and Karmila Garth; sisters, Janice Garth, Brenda and Dennis Blair; a host of nieces, nephews; special cousins, Kathleen and Gregory Baldwin, Darren Lindsey, Michelle Thomas, Debra Coleman; other relatives and friends including close friends Jeffery "Big Jeff” Larry, Barry and Clarence, Dennis. Mr. Garth was preceded in death by his parents, William (Bertha) Garth; one sister, Josephine Smith; a niece, Dominque Nicole Garth and a close friend, Roy Lee Green. Funeral service will take place at 11:00 a.m. on Friday, February 25,2022 at Evans & Browne's Funeral Home, 441 North Jefferson Avenue, Saginaw, Michigan 48607. Pastor Paul Broaddus will officiate with interment in Great Lakes National Cemetery, G-4200 Belford Road, Holly, Michigan 48442. Visitation will take place at the funeral home on Thursday, from 2:00 until 6:00 p.m.

William Garth, Jr., lovingly known as Mickey, was born on May 25, 1957 in Saginaw, Michigan to William and Bertha (Larry) Garth. He was the second oldest of four children and the only boy. He passed away on Saturday, February 12, 2022... View Obituary & Service Information

The family of Mr. William Garth, Jr. created this Life Tributes page to make it easy to share your memories.

William Garth, Jr., lovingly known as Mickey, was born on May...