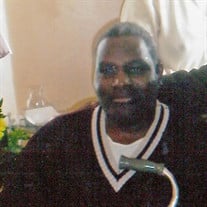 Willie Arbie Cassell was born in Wolf Island, Missouri on February 25, 1948 to Neal Cassell and Lee Anner Clark-Cassell. He fell asleep in death on Thursday, December 25, 2020 at the age of 72 years. Willie moved to Saginaw, Michigan in 1965 at 17 years old. He graduated from Saginaw High School in 1967. After high school, he worked a few jobs, including Saginaw Malleable Iron Plant and Saginaw Sanitation Company, before becoming baptized as one of Jehovah’s Witnesses in 1976. He regularly attended the Saginaw Central Congregation for years and still was doing so upon his passing. On September 30, 1978 he married Sylvia Austin. They had two children; Adrian in October, 1979 and Justin in May, 1983. Willie was a kind, Joyful person with a sense of humor. He enjoyed preaching about Jehovah, helping others, listening to music, playing pool, reading the paper, and spending time with friends and family. He was also very close to his older twin brother, William. Willie leaves to cherish his memory, his wile of 42 years, Sylvia Cassell; two sons, Adrian (Meesha) Cassell and Justin Cassell; his brother, Yuker Cassell; two sisters, Betty (Leeroy) Walker and Leatrice Monroe; a host of spiritual families members as well. Mr. Cassell was preceded in death by his parents, Neal and Lee Anner (Clark) Cassell; four brothers; Ulister, Carneal, John, and William and two sisters, Leoda and Rosemary. The family wants to acknowledge with deep appreciation the many expressions of love, concern, and kindness shown to Willie by all those who cared about him. We want to give a special thanks to our spiritual brothers and sisters, his home care giver, and the Progressive Cardiac Care hospital staff of Covenant Medical Center Cooper for going above and beyond in assisting him in his time of need. He will be dearly missed. A private service has taken place.

Willie Arbie Cassell was born in Wolf Island, Missouri on February 25, 1948 to Neal Cassell and Lee Anner Clark-Cassell. He fell asleep in death on Thursday, December 25, 2020 at the age of 72 years. Willie moved to Saginaw, Michigan in 1965... View Obituary & Service Information

The family of Mr. Willie Cassell created this Life Tributes page to make it easy to share your memories.

Send flowers to the Cassell family.