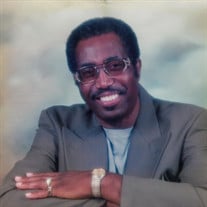 Our beloved, Willie Irvin Sr., husband, father, grandfather, great-grandfather, uncle, cousin, and friend, departed this life on Monday, November 16, 2020 at the age of 80 years. He was born to Willie B. Irvin and Laurence Bishop Irvin on April 24, 1940 in Hayti, Missouri. As a child, he and his family moved to Michigan and settled in Carrollton where he made many, many friends whom he stayed in connection with until his death. Willis, as many called him, graduated from Saginaw Arthur Hill Tech in 1959. After graduation, he moved to Rockford, Illinois for a short stay and afterward, returned home to Carrollton. He joined the Army in September 1963 and served until 1965. Upon taking a leave in 1964, to attend his father's funeral, he met the love of his life, Frances Johnson, whom he married on March 24, 1967. After receiving an Honorable Discharge from the Army, he worked at Saginaw Steering Gear for 33 years and retired in 1999. He joined Clearstone First Baptist Church, where he sang in the male chorus for a short while. Willis was a charter member of the "Soul Survivors Motorcycle Club" where he acquired the nickname "Brokeback". Outside of being a loving father and grandfather, who his grandchildren affectionately called "Pawpaw", he was a passionate Harley motorcyclist who enjoyed traveling across the U.S. Willis had an infectious personality and would say the craziest sayings that would have you in laughter. For an example, he was adamant that his work glasses were shatter proof, therefore to prove his theory, he threw them on the floor, stomped on them and picking them up, they were in pieces. This was part of his comical ways and antics that would keep you in stitches. As much as we tried to prolong his time here, his body had become too weary and weak to fight his many ailments. With God's help, he was released into his rest. He leaves to cherish his precious memory, the love of his life, wife, friend, and caregiver, Frances; two sons, Willie Jr. (Jacqueline), and Frederick (Yolanda) Irvin; daughter, Wenona (Jerome) Vaughn of Woodbridge, Va.; grandchildren, Bria and Warren Irvin, Saginaw, MI, Keenan Irvin Benning and Diamond (Henry) Peoples both of Lansing, MI, Naomi and Nilah Vaughn, Woodbridge, VA; special great-grandson, Kingston Maxwell, and inherited grandchildren, Niara and Fateyva Miles, Adarious Scott, Jackson Harris, Darrell, Kilp, and Kayla Young. He also leaves behind a host of nephews, Michael Barnes, Marlin Templeton, Derrick Barnes, Larry D. Irvin, Kensel Webb, Ruben Irvin, Marcus Bates, Andrew (Nancy) Johnson, Jr., James Jr. (JayJay), Wesley Harris, Larry Johnson Jr., Matthew, Jalen Johnson; nieces, Lucille Webb, Michelle Little, Debra Walker, Frances Irvin, Anise Ankrah, Alicia Carter, Janelle Johnson, Ronda Hendricks, Peach Omaranmilowo, Andrea Rowell, Brenda Johnette (Pebbles); sisters in-law, Loistine and Hazel Irvin, Brenda Harris and Renee Johnson; brothers-in-law, Andrew Johnson Sr., Larry Johnson, Sr. and Tyrone Johnson. Willis also leaves to grieve his passing his special brother-in-law, James E. Harris, Sr.; very special cousins, Clinton and Melvin Henderson, and many friends from the Carrollton Community and Bethany Street Neighbors. He will truly be missed! He was preceded in death by his father and mother, Willie B. Irvin and Laurence Bishop Irvin; sisters, Cornelius and Glennie Irvin, Velma Templeton and Doris Webb; brothers, Clarence Irvin, Ruben Irvin Sr., and Larry Irvin Sr.; nieces, Tonya Moxley and Adrienne Barnes; nephew, Calvin Webb; mother-in-law, Johnnie M. Randall; father-in-law, Sam Johnson (Clara); sisters-in-law, Evelyn and Rita Johnson. The Family would like to express many thanks to Covenant Cooper ICU, Dr. Jane Castillo, and everyone who has extended their love, sympathy and prayers during this difficult time. Visitation will take place on Monday, November 23, 2020 from 2:00-6:00 p.m. at Evans & Browne's Funeral Home, 441 North Jefferson Avenue, Saginaw, Michigan 48607. A private service will be held with Pastor Eugene Burton officiating. Interment will take place in Great Lakes National Cemetery, 4200 Belford Road, Holly, Michigan 48442.

Our beloved, Willie Irvin Sr., husband, father, grandfather, great-grandfather, uncle, cousin, and friend, departed this life on Monday, November 16, 2020 at the age of 80 years. He was born to Willie B. Irvin and Laurence Bishop Irvin on... View Obituary & Service Information

The family of Mr. Willie A. Irvin Sr. created this Life Tributes page to make it easy to share your memories.

Send flowers to the Irvin family.