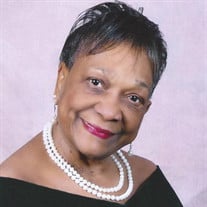 Zoetta Williams was born to George and Idella Cooksey Williams on November 15, 1931, in Evansville, Indiana. She graduated from Lincoln High School in 1949 and earned her Bachelor of Science Degree in Education from Evansville College in 1953. Zoetta had a desire to move away from Evansville to begin her teaching career and found that the Saginaw Public School System located in Michigan was offering the impressive salary of $3,000.00 per year. Within a couple weeks prior to the beginning of the school year, Zoetta and her newlywed husband, Charles Leonard Davis relocated to Saginaw. She began her career teaching 1st grade students at Longstreet Elementary yet she continued to seek higher education by earning her Master's Degree in Education from the University of Michigan in 1959. She continued her quest for higher learning and completed a Specialist Certification in Program Evaluation from Ohio State University. Zoetta Davis, was an exemplary professional, who worked for the Saginaw Public School System for 44 years. She worked as an elementary teacher, as the Evaluator Supervisor of the Testing and Evaluation Department and spent her last twenty-two years as Principal at Houghton Elementary School prior to her retirement from the district in 1998. Many of her ex-Houghton students would say that if you heard the click-clack of her high heel shoes coming down the hallway, the students would hurry and get back to their classrooms; because “Miss Davis don’t play that mess.” After her retirement she spent her final six years in education as the Field Placement Coordinator for Saginaw Valley State University. Zoetta was a loyal and faithful member of Bethel A.M.E. Church for over fifty years. She was active with the Tuesday Night Bible Study Class, the Courtesy Committee, 135th, 140th, and 150th Bethel Church Anniversary Committees, each Michigan Annual Conference Steering Committee and a Class Leader where she reached out to church members sharing messages of promoting Christian fellowship. Mrs. Davis also enjoyed her time serving on the Board of Directors for the Bethel A.M.E. Church Day Care Center. In June 1973, Zoetta was initiated into her beloved Alpha Kappa Alpha, Sorority, Incorporated, Eta Upsilon Omega Chapter, Saginaw, MI. She was a Life Member and Silver Star, serving as Eta Upsilon Omega Chapter President, and chair of numerous committees. Over the years, Zoetta enjoyed attending the sorority’s Boules (national meetings) throughout the United States. It was also an occasion to celebrate with sorority sisters and bring along her children and Godchildren as a family vacation. Zoe’s community involvement included obtaining the NAACP Silver subscribing membership, she was an avid Friend of the Saginaw Public Library and she enjoyed her membership with the Castle Museum where assorted displays from the past always captured her attention. Zoetta was a charter member the Saginaw Chapter of Top Ladies of Distinction, Inc. serving on many committees including the honor of being a past president for the organization. Other organizations that were dear to her heart included serving on the Board of the YWCA, Saginaw Habitat for Humanity and Mid-Michigan Idlewilders Club. Zoetta was an explorer who loved to travel throughout the United States and abroad. She also enjoyed the joy of reading hardback books. She could read a 400-page book within two days. Zoe also loved the card game of Bid Whist (but only played with real card players). Another passion that was dear to her heart was the time she spent at her cottage located in Idlewild, Michigan, where she would get away from the hustle and bustle of the city. Two of her greatest joys was to cook and bake. She could fry the crispest fried chicken that would make you want to slap your momma and boy did her gumbo (recipe shared by the late Catherine Burton) make you want to turn flips. During the Christmas holidays everyone would beg Mrs. Davis to bake Hello Dollies, green Christmas wreaths and melt in your mouth holiday shaped sugar cookies. Mrs. Zoetta Davis leaves to cherish her memory, her children Cynthia Davis Townsend of Saginaw, Michael Charles Davis of Hapeville, Georgia, grandson Jonathon Wesley Townsend of Duluth, Georgia, great grandson, Karter Nasir Townsend, Duluth, Georgia, sister Gloria Williams, Harrisburg, Illinois, niece Debra Hicks, Evansville, Indiana, nephews, David Williams, Harrisburg, Illinois, George Williams, Indianapolis, Indiana, great nieces and nephews and many cousins. She also leaves Goddaughters Judyth Carter Norris of Shelby Township, Michigan, and Courtney Chaffer of Atlanta, Georgia, along with her closet sisters/friends, Lucille Chaffer, Rowena Taylor and all the members of Eta Upsilon Omega Chapter of Alpha Kappa Alpha Sorority, Inc., Top Ladies of Distinction, Inc. as well as members of Mid-Michigan Idlewilders Club. She was preceded in death by her husband Charles L. Davis, parents George and Idella Williams and sister/friend Frances Carter. Funeral service will take place at 11:00 a.m. on Tuesday, September 28, 2021 at Evans & Browne's Funeral Home, 441 N. Jefferson Avenue, Saginaw, MI 48607. Pastor Dennis Laffoon will officiate with interment in Forest Lawn Cemetery, 3210 S. Washington, Saginaw, MI 48601. Friends may call at the funeral home on Monday from 2:00 p.m. until 6:00 p.m. The Ivy Beyond the Wall Ceremony will be conducted by Alpha Kappa Alpha Sorority, Inc., Eta Upsilon Omega Chapter at 5:00 p.m.

Zoetta Williams was born to George and Idella Cooksey Williams on November 15, 1931, in Evansville, Indiana. She graduated from Lincoln High School in 1949 and earned her Bachelor of Science Degree in Education from Evansville College in 1953.... View Obituary & Service Information

The family of Mrs. Zoetta Davis created this Life Tributes page to make it easy to share your memories.

Zoetta Williams was born to George and Idella Cooksey Williams...

Send flowers to the Davis family.